Earlier, I looked at the observed performance spread that we see in NHL shooting.  When I talk about shooting talent, I mean a player's ability to score from a particular spot on the ice relative to the league average.  To that end, I looked at player shooting at even-strength over the last five seasons, using only road shots to reduce scorer bias.

But, of course, when we measure a player's performance, we're only getting a snapshot of his ability.  The range of ability is usually much smaller than the range of performance.  So to determine the range of player ability, I started out assuming that the talent distribution matched the observed performance ability.  I then updated my estimate of each individual player's range of abilities using the actual outcomes that player achieved in each season.

For Ilya Kovalchuk, who I believe to be an exceptional shooter, the progression of his mean talent estimate over the course of five seasons looked like:

I ran this for every player in the league over five seasons (for season where they had fewer than 20 shots, I didn't update my estimate) and ended up with the following estimated distribution of talent: 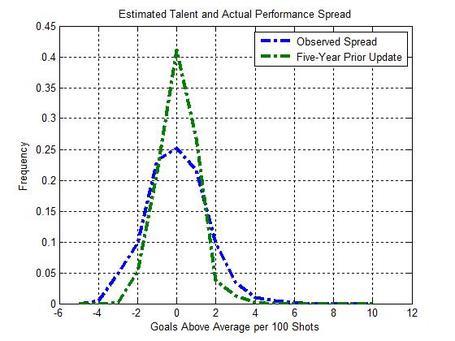 As for Kovalchuk, I'm afraid I don't have such a good answer.  He goes from being roughly 2.8 standard deviations from the mean with the original distribution to being somewhere between 7-8 in the final estimate.  I'm comfortable with Kovalchuk in the range of three standard deviations above the mean (eg - Tanguay may be just as good, so he's clearly not 1-in-1000) but eight is clearly not the right answer.