Share All sharing options for: EPL: How Controlling Territory leads to Winning

Here's the main reason why I stress the importance of controlling territory in soccer. Territory percentage is essentially a measure of where a team has the ball - it takes the number of completed passes and weights them by the difficulty of completing each pass. The plot below is for the last four seasons of the English Premier League. I've taken the road team's territory percentage in every game while the score was tied and plotted it against their winning percentage - we could have looked at this as a logistic regression, but I'm showing it as bucketed data. 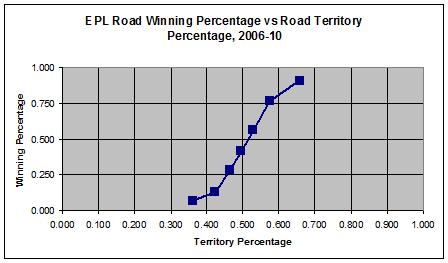 If we look at this data at the season level, we see a very strong correlation between territory percentage and winning percentage: 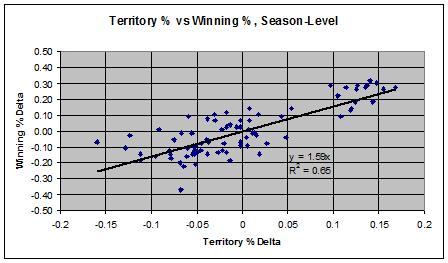 Of course, a lot of that comes from Arsenal, Chelsea, Liverpool and Manchester United having been that much better than the rest of the pack over the last four seasons. If we remove them from the sample and look only at games between the other sixteen teams in the Premier League, the r^2 at the season level drops precipitously. What doesn't change is performance at the game level: teams that control passing and territory when the game is tied also end up winning.

One thing is for certain: controlling territory (as you might have suspected) is a true talent at the team level. Here I'm showing a team's territory percentage in even and odd minutes in tied road games: 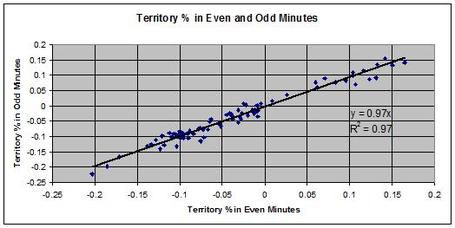 This is essentially a perfect fit. There's no indication that passing and controlling territory - when the game is tied - has a major luck component to it. There are other ways to verify that, and I'll discuss that in the future. Next time, I'll take a look at how a team's ability to control territory impacts performance in head-to-head matchups.