Well, that was an ugly outcome for the Argentines - Germany's 4-0 win was the largest margin of victory in a quarterfinal match since the World Cup went to its current format in 1986. The passing stats from Germany's perspective are all over the map:

[Weighted passing means that passes are weighted by the likelihood that they were completed. The more dangerous a pass, the higher its weighting. Read more here. I use weighted passing because it's a better predictor of winning percentage than raw pass totals. And the score is incredibly important because teams that are down a goal tend to control possession. You can find way more soccer analysis here.]

Overall, after Germany scored their quick goal, Argentina controlled the play. But if we look at possession and territory over time, we see a different story: 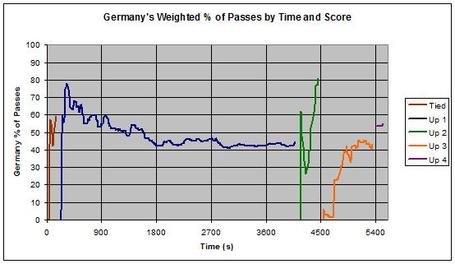 Even after they scored, Germany still controlled the play until the 25th minute. Argentina finally snapped out of it and had 60% of the play for the next 42 minutes...until Germany scored their second goal. In terms of territory, the Argentines did roughly everything right, but sometimes teams don't put away their chances.

It's hard to draw any conclusions from such a lopsided game - against both England and Argentina (round of 16 stats; ENG-GER match stats), they've spent very little time without the lead, so we don't really know how they do during extended periods of close games - aside from being able to score, which is an enviable skill to have!