Share All sharing options for: Observed Distribution of Shooting Talent

Don't ask me why, but I was thinking about how unlikely it was that Jody Shelley scored two goals in the final two games of the regular season, and I got to wondering about the spread of shooting talent in the NHL.  I think this chart pretty clearly shows the range of talent we're trying to pick out: 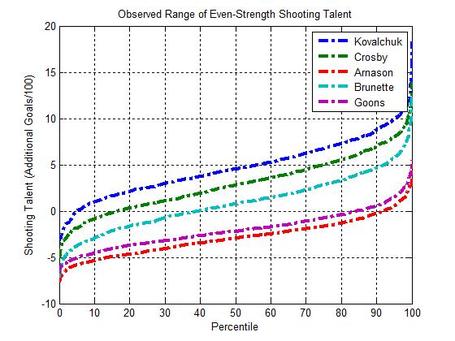 So to explain this chart: I calculated the expected shooting percentage (aka shot quality or shot location) for every initial non-rebound shot taken on the road by every player at 5v5 over the last five seasons.  Then, for the players shown above, I randomly selected 100 of their shots and looked at how much they exceeded the expected shooting for the league as a whole.  I repeated this process 1000 times to arrive at a distribution for their mean talent.

Note that there is not one player in the entire NHL who - by this method - we can say is an above-average or below-average shooter with 95% confidence.  Kovalchuk is very close, and we can be extremely confident that he's a better shooter at 5v5 than Jody Shelley, but we can't even be sure of that after five years of watching Kovalchuk's slick offensive play and Shelley's brutal hands.  (I'm willing to bet on Kovalchuk, btw...I'm just saying we don't know for sure...)

Now keep in mind that this doesn't capture a player's ability to get in position to take a shot.  Andrew Brunette led the league in shooting percentage last season because he has the ability to frequently get an open shot right around the net.  But once he has the puck, he is no more likely to pick the top corner from those same spots as any other player. 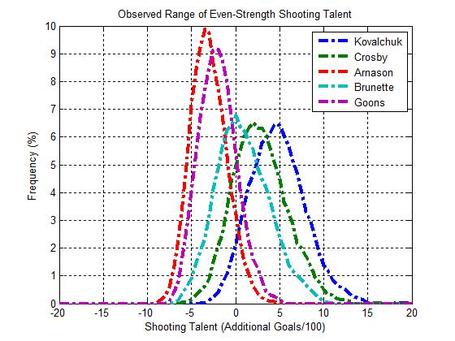 Another way to see what's going on here is through histograms (the PDF as opposed to the CDF) of shooting performance.  It's possible that Jody Shelley will outshoot Kovalchuk over their next hundred shots.  It's just very unlikely.