Why Ilya Kovalchuk's contract was rejected

Share All sharing options for: Why Ilya Kovalchuk's contract was rejected

Ilya Kovalchuk signed a 17-year, $102M contract with New Jersey on Monday, which was promptly rejected by the NHL. (Or not so promptly, given that the Devils already had a press conference to announce the signing.)

But it should be pretty clear why the contract was rejected.  There are nine existing contracts that 'violate the spirit of the CBA' by de-escalating a player's salary over a number of years to reduce his salary cap hit.  Those contracts are:

As you can see, Kovalchuk's was the longest of the group, and it took him almost to age 44, two years longer than the other contracts.  We can see the progression of these contracts by age: 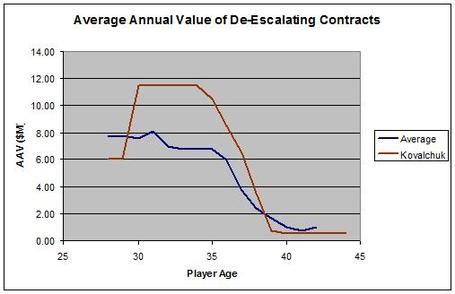 Everything about Kovalchuk's contract is just a bit more extreme than every other contract that came before it.  The length, the end age, the ratio of high-to-low salary - they all looked worse than anything any other team had tried before.  Or, more specifically, they made a larger end run around the CBA than anyone had ever tried before:

The NHL saw no problem with Hossa and Pronger signing contracts last season that saved their teams over $2.4M of cap space during the years when they'd likely still be playing.  But a $3.5M discount was too much.  We'll see what the Devils come back with to get this contract in line with expectations - if history is any guide, a 15-year, $102M contract would be just fine.