There isn't much to say about the outcome of this game: after over two hours of play, almost all of which was tied, it went to coin tosses, and the Ghanians flipped tails a few more times than we would have expected.

Let's look at the passing through the game: 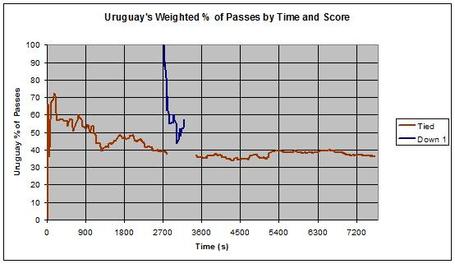 Uruguay controlled possession initially, but Ghana was in charge for most of the 1st half, culminating in a goal on a typically low-percentage shot. Uruguay took the ball to start the second half and scored on a nice free kick. Then Uruguay allowed Ghana to control most of the play for the rest of the game. It was only sheer luck that kept them from losing at the end of extra-time, and further good luck gave them the win in PKs.

We can see how this process looked by score:

Or combining by game state:

I don't really get Uruguay - unlike the rest of the good teams in the tournament, they simply fail to have ball possession when the game is tied. Except against South Korea, that is - so clearly they are capable of controlling the ball. But they seem content to allow a lot of opportunities while apparently preventing their opponents from good scoring chances - they've allowed just two goals.

Uruguay has yet to play a truly good team, so it remains to be seen if this strategy is the path to winning in the semi-finals.