Share All sharing options for: World Cup: how Holland Won

This was a strange game, really. If we divide it into four parts:

1) Brazil came out controlling the game and scored a quick goal.

2) Then Brazil slowed the game down, and kept ball possession despite the desperation of the Dutch.

3) Holland tied the game and all of a sudden they were completely in control.

4) After their second goal - and Felipe Melo's moronic red card - the Dutch slowed the game down to virtually nothing and held on for the win.

We can see that in the passing stats:

So what happened to the Brazilians? I'm not a big believer in momentum, or the psychological impact of giving up a goal when you've been dominating your opponent. Pro athletes have been through pressure situations a million times before. But Brazil seems comically undisciplined and may be the rare group of elite soccer players who can't deal with adversity.

If we combine all game states, we do see that Holland had a very slight advantage when the game was tied:

That doesn't tell the entire story - it's instructive to look at the cumulative weighted passing percentage: 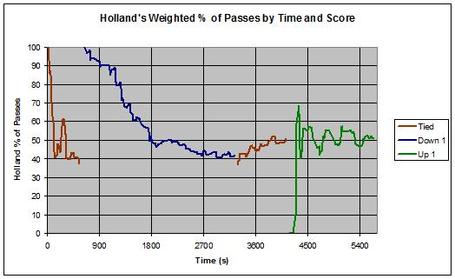 When Holland went down a goal, they controlled the play for the first 15 minutes before Brazil took the game over until the point where Holland evened the score. During the short period of time that the game was 1-1, Brazil initially had control, but Holland regained control of possession until they ultimately scored their 2nd goal.