Soccer: Value of a Throw-In

Share All sharing options for: Soccer: Value of a Throw-In

Previously, I looked at the value of corner kicks and goal kicks in terms of generating shots on goal. I wanted to do the same thing for throw-ins. While corners and goal kicks are indistinguishable from one another, the value of a throw-in depends on where it's taken along the touch line. As you can see from the chart, the optimal location for a throw-in is approximately 83-87 yards down the line, or roughly at the top of the box: 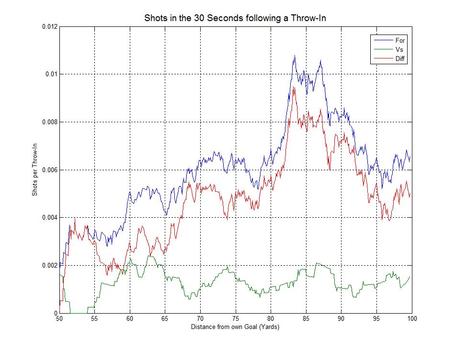 Overall, throw-ins from the most dangerous locations produce about 20% as many shots as a corner kick. I didn't show the outcome of a throw-in in a team's own end - these are, not surprisingly, very low-event plays, with the throwing team usually getting possession of the ball and not quickly working towards the goal.

In my analysis of corner kicks, scoring opportunities had a huge time dependence - shots on goal peaked roughly three seconds after the ball was kicked. We don't see that with throw-ins - they are played into open space and a team sets up their regular attack from that spot. There's no reason to think that a chance would result at any specific time following the throw-in.