Much has been made of the precipitous drop in World Cup scoring over the first 32 games in South Africa. Since the World Cup expanded to 32 teams in 1998, the average number of goals scored per game in group play was 2.59 goals/game. In 2010, it's 2.09.

Of course, one of the questions we always ask at this site is "could this have happened by chance?" To figure that out, I took the number of goals scored in each game in group play in the 1998, 2002 and 2006 World Cups, randomly selected 32 games from that set, and then found the distribution of scoring levels. You can see that distribution compared to the 2010 scoring level in the chart below: 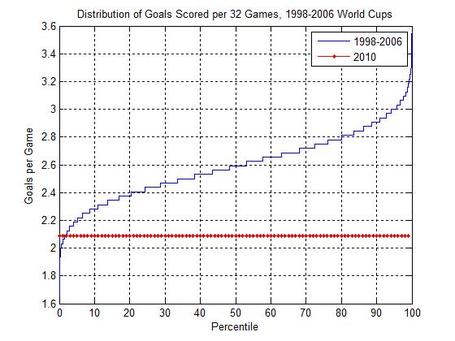 If scoring were at the same levels as in the last three world cups, we'd expect 16 additional goals thus far. A small part of that (2.5 goals) is due to historically low levels of awarding and scoring on penalty kicks. But the other 13.5 goals are a bit more of a mystery. We don't expect scoring to drop: overall shooting is up 3% (to just over 27 shots at goal per game) compared to 2002 and 2006 - which could mean either teams are limiting opportunities, goaltenders are better, or the scorers in South Africa are more generous with what qualifies as a shot. Scoring levels have also been identical in the first 16 and second 16 games, so it's not an issue of differing levels of competition.

Whatever it is, it's extremely unlikely that the 2010 World Cup is so low-scoring by chance alone - past performance suggests this is a 97th percentile outcome.