Share All sharing options for: World Cup: Closest Positioning to Opponent's Goal (through 6/13)

We have some location data for where players play - in particular, we can see where a player is on the field, on average. These are the 10 players who've played closest to the goal in games thus far:

I don't know how accurate the data collection is, but Gignac certainly seems to have played a completely different game from any other forward in the tournament. At the other end of the field, obviously the goaltender is playing the furthest back - among non-goaltenders:

Here's the distribution of player locations thus far in the world cup: 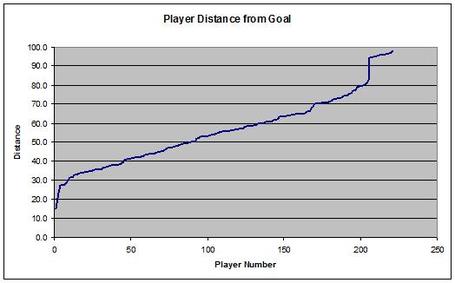 These are average positions by game, so the distribution of instantaneous player locations is a bit broader.