Leverage and Timely Goals in Soccer

Share All sharing options for: Leverage and Timely Goals in Soccer

I'm guessing that most people coming to this blog are familiar with SB Nation's soccer coverage, but if you're not, I invite you to take a look at the main soccer page. SBN has six sites devoted to the English Premier League, five MLS sites and two general soccer sites, along with a huge amount of World Cup coverage.

If you're unfamiliar with the concept of leverage, it essentially captures the likelihood of winning given the score and the time remaining in the game. For example, a team that's up one goal in the 90th minute is incredibly unlikely to lose, so the leverage of the situation is very high - giving up a goal turns a certain win into a tie. On the other hand, when a visiting team is up one goal in the first 15 minutes, it doesn't even win the game 50% of the time, so the leverage is much lower.

The first step in determining leverage is to look at a team's winning percentage based on the score and the time on the clock. In this case, I've used data from the English Premier League, and I've looked at the number of points the home team expects to get at the end of game (3 points for a win, 1 point for a tie): 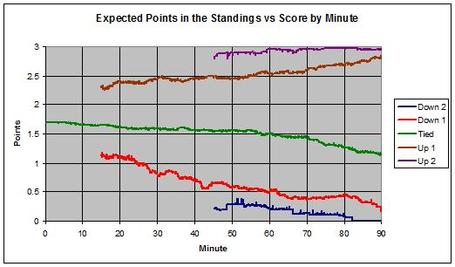 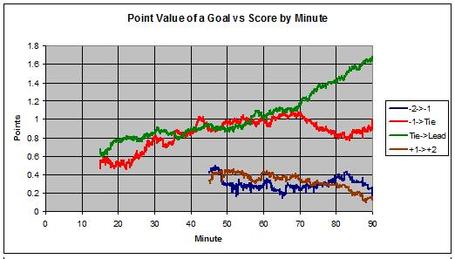 Any goal in a tie game is worth at least half a point, and you can see that as we approach the end of the game, that tie-breaking goal approaches a value of two points - the difference between a win and a tie. A significant number of goals are scored in injury time at the 90th minute, so leverage entering the 90th minute is only 1.7 points.