I think we can agree that this is luck...

Share All sharing options for: I think we can agree that this is luck...

Here are the league leaders in hitting posts and crossbars in 2009-10 - I have shootout data in here, which accounts for some totals not matching up.  Just 1.4% of all shots hit the iron (according to NHL.com) - Steven Stamkos somehow hit the post 16 times and could have set some real records with just average luck:

Here are the 19 unluckiest shooters in the league - Andy Greene must be kicking himself for hitting the post as often as he scored:

At the other end, we've got players who didn't hit any posts:

You can see where players hit posts from: 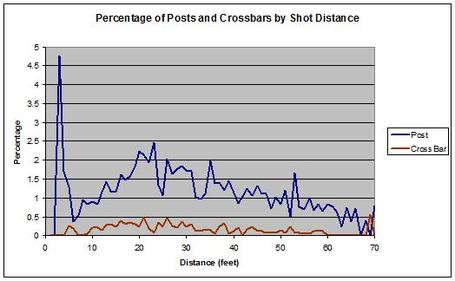 The true peak is around 20 feet - there are very few shots from closer than five feet, so seven posts and one crossbar skew the results.