Impact of Turnovers on Shot Quality

Share All sharing options for: Impact of Turnovers on Shot Quality 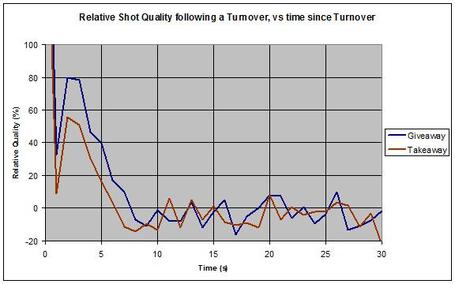 Shots taken in the five seconds following a giveaway are 74% more dangerous than comparable shots taken from the same locations without the aid of a turnover.  Takeaways lead to less dangerous chances: just a 47% increase in shot quality.  Remember that I'm talking about actual shot quality here - the amount by which shooting percentage exceeds the shooting percentage we'd expect for shots taken from the same location.

So why the big spike in shot quality for shots taken at the exact same second as the turnover?  I thought the location of the turnover might provide a clue: 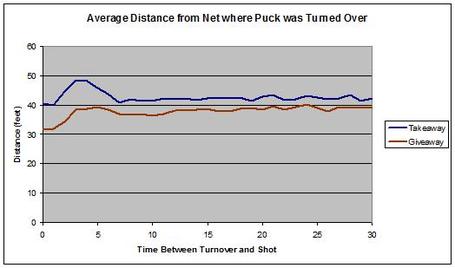 Not really - turnovers that immediately turn into shots on goal occur closer to the net than other turnovers, which is not surprising, but there's very little to distinguish a zero-second turnover from a one-second turnover.  Clearly this phenomenon will require further study.