Fooled by Randomness: Goaltender Save Percentage

Share All sharing options for: Fooled by Randomness: Goaltender Save Percentage

Here's a chart that you should always keep in mind when evaluating goaltenders: 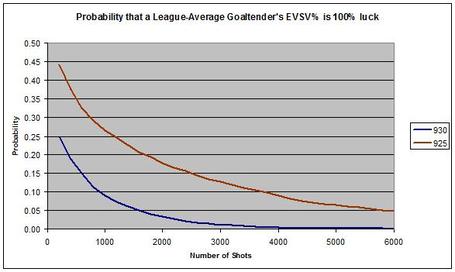 I built this chart using a coin-tossing model, so it doesn't capture some of the deterministic drivers of save percentage.  Over a small number of games, it is entirely possible that a goaltender faced particularly strong competition or played behind a defense that was missing its star players, which would change our expectation.  But what are the odds that the GM signing a goaltender paid attention to subtleties like that?

This is what makes it very difficult to find a good goaltender - you need four years of data to figure out how good he is, but you can usually only get one or two.  Some people would say that lets GMs off the hook when they sign a guy to a big contract and he doesn't work out.  I would say that level of risk means you should bet a smaller percentage of your portfolio on goaltending.