There was an assertion last week that the length of games gets longer as we get further into the playoffs.  Yes and no:

As usual, I'm missing a couple of years - 1998 and 2008, as well as the lengths of four OT games here or there.  This does not significantly affect the results.  At any rate, so the percentage of OTs is highest in the 2nd round, while OTs are longest in the finals.  It's hard to make any conclusions on that basis.

What about the length of games based on how far we are into the playoffs? 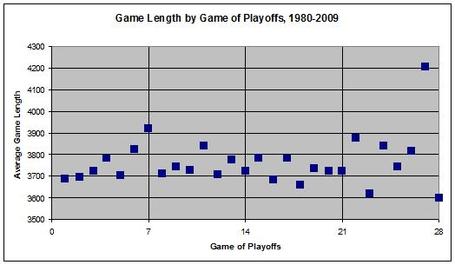 There's a nice peak at game 7 of the first round of the playoffs - but for the seven years that the first round was a best-of-five, fifth games weren't any longer than any other games.  The longest games on average have been game 6 of the Stanley Cup finals - but there have been just 11 of those, compared to 200 first round series.

One thing that is true: the last game of a series is longer, on average, than other games:

One other related question that I needed to answer.  Though the penalty rate - on a per-game basis - is higher in the playoffs than during the regular season, is it actually lower on a per-3600 second basis?

I only have three years of data for this, but it would seem that the answer is yes, though still not as large a gap as you might expect.