So. the reviews are pouring in and the chips are being thrown around: it's playoffs time! As the habs designated bean-counter for the scoring chances project, I was offered the Washington-Montréal preview by Gabriel. That it is probably the most lop-sided matchup around the league should make my job easier, no?

We will look at it from two points of view. First, a brief look at a subset of the now-commonly used Corsi rating, the so-called "Fenwick" (hey Matt!) rating. Then, we will look at how each team's players fared over the season with their most probable linemates. Fenwick, named after Matt Fenwick (hello Matt!), is a +/- based on goals, saved and missed shots. As Gabriel noted recently, Fenwick correlates strongly at team level with winning ratio. The following table gives us rates for the Habs and Capitals:

Whatever role luck played in their offensive prowesses, the Capitals are also putting up a massive amount of shots. Keeping with the Fenwicks raw data, Washington's 2818 attempts ranks them 5th in the league, behind Chicago, Toronto, Detroit and Pittsburgh while the 2673 attempts against they allowed ranks them a pedestrian 20th. The Habs, at +2562 / -2838 ranks 21st and 27th. They don't shoot a whole lot and they get peppered like there is no tomorrow.

So, at first glance, Tomas Plekanec can trash talk José Théodore all he wants, the Habs are massively outmatched and whatever edge Halak and Price hold over Varlamov and Théo probably can't make up for it. That being said, they still have to play the games, do they? So who are these guys anyway?

Special units, both of them, got the Habs in the playoffs while the Capitals fantastic PP more than compensated for their somewhat pedestrian PK. I won't delve into percentages here because it's been done elsewhere and I can only think of one thing to add, and it's habs-related: the Canadien's PK was stellar up until the Olympics break and it was a good thing because the habs were up there with the most penalized teams. It seems that Markov's return in january helped; after raking in a tremendous amount of PK opportunities in the first three months of the season, the habs have been one of the least penalized teams in the league (see espn's monthly splits) in the new year, ranking them right beside Washington in times shorthanded at season's end. That being said, 25.2% on the PP is just sick sick sick.

I'll start with a longish explanation of the tables I'm using.

While trudging along the Habs season, I took the habit of presenting data in a cross-tabular way, so that one could see who played well with whom and for what amount of time on ice. A simple table with columns allocated to centers and lines to wingers gives a pretty good idea of what's going on. So the following tables will show Center/Wingers and Defencemen pairings. The data is a subset: are counted 5 on 5 Fenwicks (saved shots, missed shots and goals) and Zone Starts (defensive and offensive zone faceoffs attended) since the beginning of the season, extracted from the NHL's play by play data.

Fenwicks and zone starts are shown in three different ways: the total amount of events generated by both teams while the players are on the ice (N), the raw differentials (+/-) and the proportions (%). So you can read the table this way: Backstrom was on the ice with Ovechkin for a total of 1493 shots and 546 non-neutral zone faceoffs. The Fenwick differential was +205 and the Zone starts +90, meaning that Backstrom and Ovie were on the ice for +849/-644 Fenwicks, 318 offensive zone faceoffs and 228 defensive zone faceoffs. So they manage to translate a very favourable zonestart ratio (58%) into an almost symmetrical (and quite overwhelming) shot ratio (57%).

Keep in mind these aren't a given player overall numbers (well except for the Semin/Semin matchup, see below), but his numbers while on the ice with a given linemate.

Back to line matchups. Looking at the possible players matchup in this series is fascinating, if only because Jacques Martin and Bruce Boudreau just don't roll the same way. Martin is old-school and dobberhockey's line combos over the last 10 games make that perfectly clear. 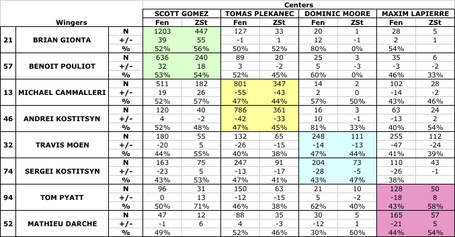 Martin has well defined 1st/2nd/3rd/4th lines with each having a precise role (insofar as "dont get beaten up!" is a role, that is). Plekanec and Gomez are the heavy lifters and Martin always, always tries to match them against tough competition, favouring Gomez for offensive zone faceoffs and making sure Plekanec follows the other teams top line around. Moore, since taking over Metropolit (who is now hurt) spot as #3 C, plays softer opposition but still has his fair share of defensive assignations against tougher opponents, especially on the road. The fourth line is basically sheltered and asked to take offensive and neutral zone faceoffs without getting torched. The season-long numbers aren't very kind to them, but Pyatt-Darche-Lapierre have been pretty efficient over the last two months.

Looking at Boudreau's lines over the same timespan, the last 10 games have seen Ovechkin-Knuble-Backstrom on the ice 20% of the time at even strength, then Semin on two lines (?), then Chimera and... quite frankly, I have trouble making sense of it; looks like Boudreau likes to move guys around, which is why I can't pin down the Caps lines with the same accuracy. Oh, and I've listed Semin with both the wingers and the centers so we can see how he fared with all of his linemates.

Boudreau's thing, to my eye, seems to agressively play territorial matchups. With the kind of firepower he has, it seems logical not to mess around hard matching players against given opponents, instead making sure the howitzers are always pointing toward the opponent's net. Backstrom, Knuble and Ovechkin get 60% of offensive zone starts together (which is pretty darn high) and Laich and Fleishmann are up there too when paired with Backstrom. Morrison seems to get fairly good zone starts too, while Bélanger and especially Steckel gets far rougher sledding. Semin's zone starts are interesting: trough the roof with Backstrom and Ovechkin, they go down when matched with Fleishmann and Laich. The Laing-Bradley-Steckel troika actually looks like it's pretty good at swimming upstream; that alone is trouble for the Habs, who survive at ES insofar as Gomez and Pleks hold their ground against the tough guys (tagging them for a few goals while they are at it) while Moore and Metropolit/Lapierre's lines find ways to chew on the opposition's bottom-6. It looks like the Caps soft minutes aren't that soft.

Martin's handling of his defensive corps is as orderly as his offensive lines. Hamrlik and Spacek are the heavy lifters, Markov and whomever plays on his right gets the remaining tough matchups (but with a lesser amount of defensive zone starts) and Gill-Gorges get the soft parade. When Markov came back in late december, Martin actually paired him with Gorges and sent them against the toughest comp available. But Hal Gill, as good as he is on the PK, just can't hold his own at ES without Gorges; the gruesome line with Bergeron isn't far lower than what he did with the now-injured Mara. Oh, right, Bergeron. The man is fire and brimstone in the offensive zone but he is a pox in the defensive zone when the opposition starts forechecking for real. For better or worse, it now looks like Martin will pair him with Markov and go the high risk, high reward road. It's a gamble, especially against the Caps, but the fact is that, over a 20+ games span, O'Byrne's numbers with Markov were just deradful. If Boudreau can match Ovie against Bergeron, tough, I wouldn't be surprised to see Martin get Gorges back with Markov and play his top-4 for 25+ minutes each. That or he benches Bergeron and runs a Spacek-Hamrlik-Markov Switch-a-roo until one of the old Czechs dies of a brain aneurysm. Life's a bitch, sometimes.

Quite frankly, I'm not so sure this table is copmlete. The matchups are based on the last 10 games defensive pairings and I'm just not sure how Boudreau runs this show. Obviously he runs Shultz/Green out there as much as possible when the puck goes toward the offensive zone, with Corvo/Poti getting in on the action too. But other than that, I'm not so sure who gets the defensive assignments... That Morrisonn/Green combo doesn't look that good, tough...

If any Caps fans have suggestion for enhancing those charts, I'm all ears.

The Habs true strength in net doesn't come as much, IMHO, from Halak's strong play but from the fact that Price really isn't that much worse, which means they both are pretty darn good and are more and more looking like proven performers. Over the last 4 seasons, Halak has an ES S% of 0.925 on 2456 shots while Price stands at 0.923 on 3129 shots; this year, Halak stands at 0.933 and Price at 0.921... If one falters, well you just bring in the other one. That being said, it's been some time since I've lurked on the Contrarian Goaltender's site, so I may be overestimating how significant a 3000+ shots sample is.

I guess one could say the same about Varlamov and Théo, as this year the former stands at 0.929 on 591 shots and the latter at 0.924 on 1055, but Théo is 0.916 over the last 4 years while Varlamov is 0.927 but with only 714 shots faced. Still, these are two capable goaltenders and are most probably godd enough to negate MTL's advantage.

A rising tide raises all ships. There is a very good chance that some of the numbers posted by Washington's players comes from those guys riding Ovie and co's coattails. And so on the other hand, one can look at the Habs, see the amount of games missed by members of their top-6 and conclude this is an underrated team. Altough I rely on them with abandon, I'm not so convinced zone starts as I use them are the hard results driver I make them to be. Gabriel's recent forays on icing got me thinking; up to which point do offensive zone faceoffs are driven by the ability of a given player to swim upstream? By his coach's choices or by the simple fact that starting in the offensive zone makes it more likely that the opposition will ice the puck? Seeing Backstrom on both sides of the ledger in the aforementioned article tells me there is some work left to do with faceoffs.

As I said at the beginning, I noted scoring chances all year long for the Habs. At even strength, the 4 games tally was 51 chances for Montréal and 62 for Washington, with the Capitals outshooting (actually, out-Corsiing) the Habs 230-183. Setting the goal tallies aside, the first three games were blowouts, while the fourth contest saw the Habs outchance and outshoot the Caps. That the series was split is a tribute to tremendous performances by Price (y'know, the "backup") and good old luck.

That being said, I have to note that 3 of the 4 games occured in a 2 months span (mid-november to mid-january) where the Habs were thoroughly dreadful. The team that will lineup against the Caps Thursday is, I think, far better than those squads Washington trounced in November and January. The mid-November to mid-January hurt squad had a 43.9% fenwick rate, (same with the score tied), but since game #20742 against St-Louis, they put up a 48.5% Fenwick, 49.5% with the score tied, over the season's last 32 games. The Capitals, over the same span, put up a 51.5% Fenwick, 51.7% while tied. So even if the overall numbers are overwhelming, I can't help but feel good about this matchup (as a Habs fan, that is). The Habs do have more torque than their season totals suggests and the last 30 games tells us those two teams aren't as far apart as one could think looking at those 318 goals scored.