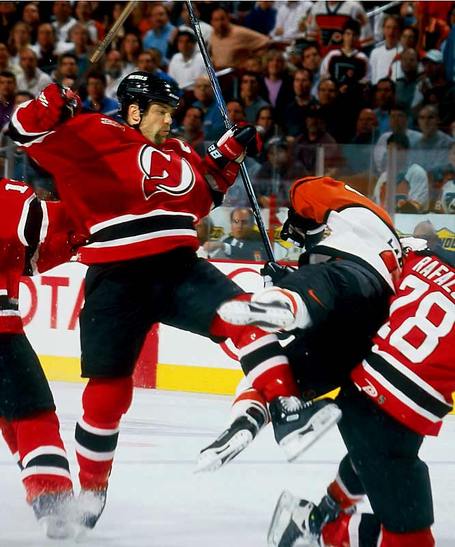 The New Jersey Devils and Philadelphia Flyers have had a history of epic playoff battles. This season's installment of the "Turnpike Series" should be no different. While the standings (i.e., total points and playoff seed) seem to imply a fairly significant discrepancy in skill, a closer examination indicates otherwise.

One of the best measures of prowess at even strength is "Shots + Missed Shots." The stat has good predictive value, and further filtering it by when the score is tied on the road removes a lot of the situational and scorer bias. Here's how these two teams stacked up by that metric in '09-‘10:

While the Devils had higher shots and misses on both sides of the ledger (presumably because they happened to play more minutes with the score tied), viewing the numbers as percentages (NJ: 49.5%  Phi: 49.4%) shows that the two teams were almost identical in terms of meaningful territorial advantage.

You will undoubtedly hear the media drone endlessly about the differences in individual shooters, hall-of-fame versus non-hall-of-fame goaltenders, and of course, intangibles ("Kovalchuk is playing with the ‘determination' and ‘intensity' of a 15th century warrior."). But I promise you none of that matters nearly as much as what was illustrated in the previous two paragraphs.

Shooting percentage (i.e., a measure of "Shot Quality") at the team level has zero predictive value. Save percentage (i.e., a measure of "Shot Quality Against" and "Goaltending") has slightly more than zero predictive value. In other words, way less than most people think. Comparing Martin Brodeur to Brian Boucher, most will consider goaltending a huge advantage for New Jersey in this series. I don't. No one has conclusively shown a meaningful difference in skill between NHL goaltenders. I'm not saying it doesn't exist, I'm just saying no one's really proved it, and that all signs point to goaltending differences being far less important than everyone thinks. (For example, the distribution of road save percentages with the score tied over the course of the full '09-'10 season was narrower than what we'd expect by chance alone. If that doesn't make sense to you, ask about it in the comments section and I'll explain it further.)

Now, given the latter disclaimers, if you had to bet on one goalie versus the other of course you would bet on Brodeur given their histories. And seeing as the territorial advantage is almost a dead heat, I'm willing to use goaltending as a "tiebreaker" to give the slight nod to the Devils in terms of advantage at even strength.

Shots on goal is the important thing to look at with regards to power play and penalty kill situations. It has more predictive value than goals or conversion rate. Teams control special teams shots by either generating/stifling shots when on the PP/PK, or by actually drawing and taking more/fewer penalties. It doesn't matter how a team does it, the important thing is that they do it. For example, year after year people see the Devils at the top of the list in Goals Against Average and assume it's due to their team defense or their goaltending, yet in many seasons when you break down the numbers by man-strength you see that the Devils were merely average in goaltending/defense but had a low overall GAA simply because they took far fewer penalties than the rest of the league.

Once again, while we see some difference in total events, viewing the shots as percentages (NJ: 55.2%  Phi: 55.4%) tells the story of two extremely similar teams. Philly did a better job of generating shots within their power plays (56.8 shots per 60 minutes compared to the Devils' 50.4 shots per 60), so if they can manage to keep the number of penalty calls equal, they will have an advantage. However, it's very difficult to play the Devils in a seven game series and take as few penalties as they do.

While both teams ended up with similar numbers in the important categories, how they got those numbers differed a bit. Corsi is the term we use around these parts to measure how many total shots were directed at net while a particular player is on the ice. If we look at each team's top forwards (as determined by the number and quality of minutes played), the Devils' Parise and Zajac had a better corsi +/- than the Flyers' Richards and Gagne by almost double! In fact, looking at each team's next four, it's hard not to give a slight edge to the Devils' Elias, Kovalchuk, Langenbrunner, and Zubrus (or Rolston) over the Flyers' Carter, Hartnell, Briere, and Giroux, particularly given Carter's foot injury. However, the Flyers' depth guys like Leino, Pyorala, and Van Reimsdyk handled their assignments better than the likes of the Devils' Pandolfo, Clarkson, and Neidermayer.

On the back end, the Flyers are quite a bit stronger than the Devils. Pronger, Coburn, Carle, and Timonen all posted a corsi +/- better than any Devils defensemen. Well, with one exception: Paul Martin. Martin was hurt for most of the season, but he is back now and supposedly healthy. He is far and away the Devils' best defensemen, and he is arguably the best defensemen on the ice for either team.

This series is much closer than most people think. Both teams are very similar in terms of even strength territorial play. The Devils have an edge in goaltending, though I question the overall significance of that edge. Both teams have very similar penalty kills. The Flyers have a better power play, but the Devils are better at avoiding penalties. Home-ice advantage makes the Devils a slight favorite, though I'm not sure how much the likely abundance of Flyer fans at The Rock affects that.