Share All sharing options for: NHL Salary Increases since 2000-01

Tyler Dellow got me thinking about this - the impact of the new CBA and the salary cap has not been felt uniformly by any means.  While the 50th to 80th salary percentile experienced roughly the same level of annual salary growth before and after the lockout, players in the top 20% of salary - approximately the five-best players on each team - have seen a much smaller rate of salary increases.  The blue line shows the annual rate of increase over the last eight seasons, the brown over the last five: 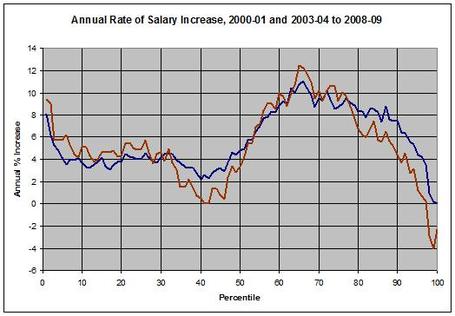 Keep in mind that the players at each percentile are different in each year as older players lose their skills and younger players become stars.  The main impact of the CBA was to place strong downward pressure on the most expensive contracts.  In other words, the very best players in the NHL are playing at a substantial contractual discount relative to what they were paid prior to the lockout.  You can make a very good argument that these players, particularly those making over $5M a year, are some of the biggest bargains in the league.