Psychological Impact of SH vs other Goals?

Share All sharing options for: Psychological Impact of SH vs other Goals?

This question came up in the open thread back in December:

"[What is the effect] of certain types of goals on game outcomes: first-minute, last-minute (excl. ENG), and esp. shorthanded goals. Obviously teams scoring them will have a Win% over 50% cuz they’re +1 by definition, but do such goals have a greater value than other goals?"

I decided to look at this from the perspective of a team scoring the game-tying goal.  I averaged over 10-minute ranges to get a large enough sample size for each point: 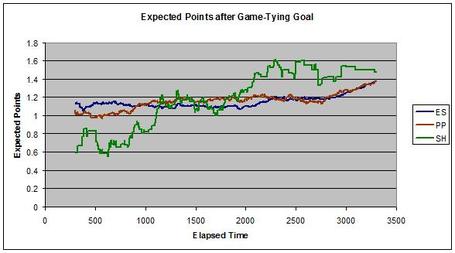 There's no consequential difference between scoring a game-tying goal on the PP or at ES.  In the 3rd period, there's no difference at all.  Short-handed goals, on the other hand, appear to be all over the map - less valuable at the beginning of the game, more valuable later.  But as you can see from the discrete and jagged shape of the SH curve, short-handed goals are rare enough that we suffer from small sample size effects.  So, unfortunately, there's no conclusion to be drawn here about SH goals.