Share All sharing options for: Leverage, Pre- and Post-Lockout

Leverage is a concept that gets used a lot in baseball - it's essentially the probability of winning at a given point in a game. In hockey, unlike baseball, teams are awarded a point for losing, so leverage actually captures not winning percentage, but the expected number of points a team can expect in the standings given the score and the time remaining in the game. Here's what the leverage looks like for 2005-09: 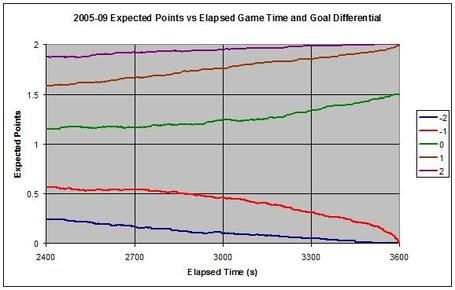 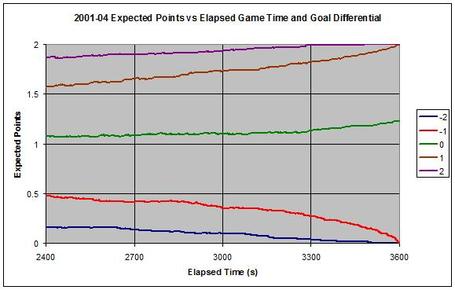 What I want to draw your attention to is the difference between the two charts. In particular, there is a significant leverage difference in tie games: 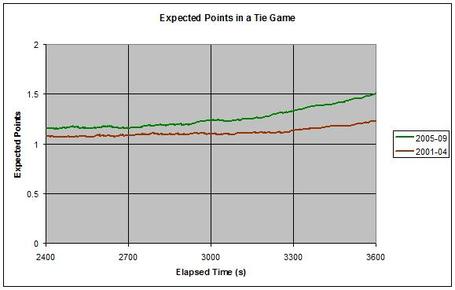 Basically, the "loser point" has completely changed third-period incentives. Giving up a tie-breaking goal in the last five minutes of the game is now approximately one quarter point more costly than it was before the lockout, while scoring that same goal is worth one quarter point less than it was before. NHL teams are obviously aware of these incentives, and it should come as no surprise that a record high percentage of games have been tied at the end of regulation time this season. I know of no other sport that works like post-lockout hockey - as long as teams don't decide to game system any more than they already do, it can probably continue. But the incentive is to play for the tie whenever you can, and the system can easily fall completely out of its unsteady equilibrium.