Sometimes you forget how the Game has Changed...

Share All sharing options for: Sometimes you forget how the Game has Changed...

During Don Cherry's one season coaching the Colorado Rockies, Denver was dotted with billboards that proclaimed: "Come to the fights and watch a Rockies game break out!" That image of hockey is forever burned on the brains of casual hockey fans - when I try to explain that hockey is different now, people laugh. But the game really has changed. For example, misconducts have dropped by a factor of four over the last 20 years, and game misconducts are six times lower: 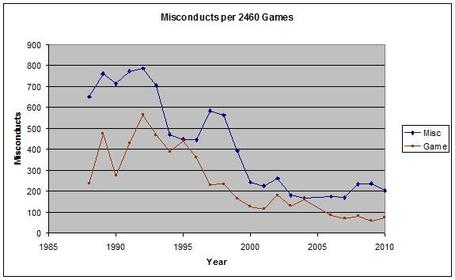 Not surprisingly, the misconduct leaders of the last 20 years are almost all out of the game:

Major Penalties are also down, though nowhere near as drastically as misbehavior-related misconducts: 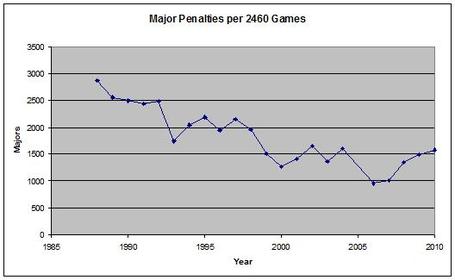 The leaders in major penalties over the last 20 years are also mostly retired. Laperriere likely has a few years left, so he could conceivably finish in 5th place:

Obviously, our list is missing a lot of pre-1987 majors. Surprisingly, penalties peaked on a per-game basis not in the "Slapshot" era, but in 1991, so we still capture a lot of the biggest penalty-takers of all-time - and of the future: it is very difficult for a modern NHL player to rack up the kinds of penalties that we saw in the past.