Tyler Dellow had a nice post about average shift lengths, and how the leaders almost all play in the Eastern Conference. To quote Tyler: "it seems to me that being on the ice after a minute is sort of like being in a bar after 1:00 a.m. - there’s no guarantee that something bad will happen, it’s possible that something good will happen but the odds are slanted heavily in favour of something bad..."

And indeed that is true of Corsi percentage - the percentage of total shots that are shots for: 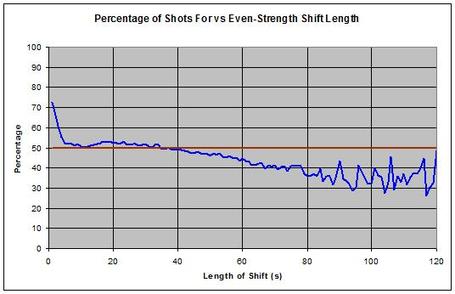 The small uptick for 0-6 seconds is from the attacking team's defensemen jumping over the boards on an offensive rush. The defending team had better not be changing when the puck is coming into its end! At any rate, the break-even point is around 40 seconds, which is roughly the average even-strength shift length league-wide, and things fall apart after that.

By 70 seconds, only 40% of total shots are shots for. To put that in perspective, only the absolute worst players in the NHL have shot totals at that level - 40% for, 60% against. Staying on the ice even just a bit beyond a minute usually turns the average NHL player into a defensive catastrophe on the scale of Wade Belak. Shifts like this are relatively rare, but most players seem to have one egregiously long one per game, with, as you can see above, mediocre results.

The story is clear when you combine the results over longer periods of time:

So as shifts get longer, not only do shot totals take a wrong turn for tired players, but the quality of the opposing team's chances goes up too. Bottom line: as Tyler said, nothing good is going to happen once you've been on the ice for a minute.