Kessel Detractors Just Don't Get It

Share All sharing options for: Kessel Detractors Just Don't Get It

Scott Burnside tells us that Phil Kessel is nothing but a disaster:

"We have always resisted the temptation to join the group that considers the Leafs’ acquisition of Phil Kessel from Boston (for what now looks like back-to-back top five draft picks) a colossal blunder. But that temptation grows stronger by the day. Kessel’s scoring struggles, along with the Maple Leafs’ woes, also grow. Kessel has scored just once in his past 10 games and has gone without a goal in seven."

First of all, unless you put your money where your mouth was when the Kessel trade was made and told the world that the Leafs would finish at the bottom of the league for the next two seasons, you can't second-guess this deal.  Before the seasons started, I saw the 2009-10 Kessel Leafs as an 88-point team, and after watching them flounder, I called the 2010-11 version as an 84-point version.  Brian Burke rightly thought he had a playoff bubble team; the fact that things didn't turn out that way can be a mark against Burke's player evaluation skills, but I can't think of anybody who did anything approaching a rigorous analysis and called the outcome correctly beforehand.

As for Kessel, jesus christ, can we get away from this idiotic notion that a guy's shooting percentage over his last 10 games means a damn thing?  Here's Kessel's 10-game moving average since he became a "scorer" in 2008-09: 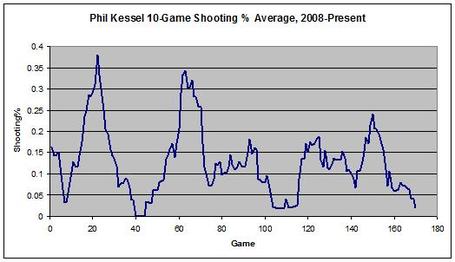 Between 12/18/2009 and 1/29/2010 - 21 games - Kessel had just two goals.  And lo and behold, he recovered his scoring touch.  Unless you know that a player is injured, short-term performance means nothing.  Phil Kessel is a career 10.4% shooter.  He didn't lose that skill in the last three weeks.  Even the best shooters in the world have 1-for-49 stretches - Kessel wasn't broken when it happened last year and he wasn't broken when it happened two years ago.