Luck in the NHL Standings

Share All sharing options for: Luck in the NHL Standings

If we had 100% parity in the NHL - every team identically skilled at all times - what would the standings look like?  Would every team's record match their talent level?  Would they all finish with a .500 record?

Not a chance.  Remember, each matchup is essentially a coin toss.  And if we toss all those coins, we end up with the green distribution shown below.  Even though every team was identical, we'd expect a wide distribution of record, with one team finishing below .400 and one finishing above .600 every season. 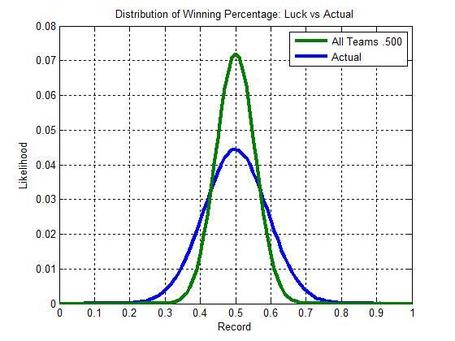 The actual distribution of winning percentage since the lockout is shown in blue.  Clearly team talent accounts for a significant proportion of the observed record, but pure luck is 38% of it.  When you look at how any given team did in a given season, you absolutely cannot assume that you've seen an accurate reflection of their talent.