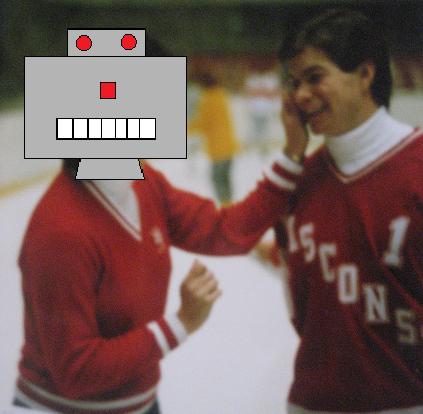 Yup, that's him...his cherubic cheek being pinched by my mother.  The robot head?  Well, unless there's someone else out there to give me Christmas cookies and presents...

Being such an advocate of the stats community, I've found it can completely change your perception of players past and present.  In my case, Mike Richter had a family of fans in our household; my mother might have found him cute, but both of my parents enjoyed watching him play.  I joined the fold as he made it to the NHL and I could collect his likeness on those classic time-burners of youth, cards.  The Cup, and his stopping of Bure on the penalty shot, embedded him in professional hockey folklore, and I'm proud to say I was there for the ride.

It was only more recently that I realized it was debatable whether he was one of the greatest of his era.

The end of his career was a fitting set-up for this revelation...the "down" years of the Rangers, Mikey getting peppered with shots, losing games...the luster of '94 pushed itself into the distance as players left and time passed.  Injuries, not ineptitude, ended his career, a concussion before people were really acknowledging how prevalent and career-threatening they were.

As advanced goaltending data became more available, it was clear that Mikey was rarely better than a middle-of-the-pack goalie, a product of the system(s) and personnel in New York as much as his own abilities.

I hated the data for it, and I wanted '94 to preserve him somehow, make him sacred to the people who said he wasn't.

Gradually, I realized that what I was resisting was futile, whether they were numbers that wouldn't bend to my will or a Hall that wouldn't have him.  All along, I had been trying to place him somewhere that he didn't fit.

Where he does fit is a story, a tale passed down, be it of the meteor of NHL history that was the '93-'94 season in New York or the soft-spoken, earnest advocate for the environment that he is now.  I preserve him in the stories I tell friends, the lessons I can tell my children, and those places that never forget how truly good Mikey was on penalty shots, even if he was up against one of the most dangerous snipers in the world.  Those places don't forget that he was a good person where we've always wanted to see good people.

His legacy will keep there, remain there beyond me.  And you know what?  I can live with that.