Okay, so it's not completely revolutionary, but I'm going to throw this out there and if you don't like it just throw it right on back. In general, I tend to think of hockey as a "free flow" sport, with a flexible sense of position and continual action. While more punctuated than soccer, there's still a feeling that we could go an entire game without a whistle.

Which makes it all the more interesting that the NHL, compared to professional soccer, has had such a rigid sense of position...

We've all seen it, been invigorated by it - Sergei Fedorov taking up a spot on the blue line, at first on the power-play but then as a sort of "flex" player in his latter years. The sense was that here was a guy so good, so fast that he could play both positions, so why not? In more recent years, it became a virtual gimmick, reserved for the power-play almost exclusively, with Dustin Byfuglien being a sort of bizarro-Fedorov exception.

What if we lost the "gimmick" label, and experimented with a 1-2-1-1 in the offensive zone? I'm talking about four forwards, one defensive defenseman. It would look like this: 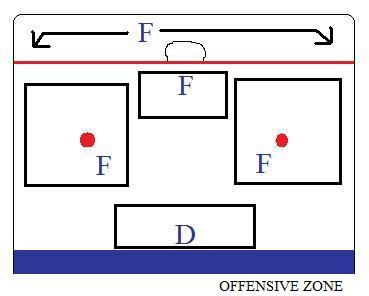 The boxes are very rough markers of position. Essentially, your higher forwards are your two-way forwards, offensive defensemen, and "energy players" collapsed into one position, capable of taking a "midfield" role on the ice. They are given a spot very close to the high slot, thus putting two shooters near a high-percentage shooting position. They are also in a good place to disrupt breakouts, positioned between the wing on the boards and a streaking center, or a carrying center and a streaking winger (lot of streaking goin' on 'round here). Of course, each one of these positions isn't rigid; over the course of play, some could switch spots on the ice. By keeping one defenseman back in a virtual "sweeper" or football "safety" position, you have a player asked to not commit to plays at the blue line along the boards, an area where defensemen often get caught too far forward just for the sake of holding the line.

Interestingly, on some occasions you'll actually see players naturally shift into this formation during the course of play. Almost on a reflex, though, the defenseman who has pushed forward will "right" him/herself to maintain the two on the blue line.

In the defensive zone: 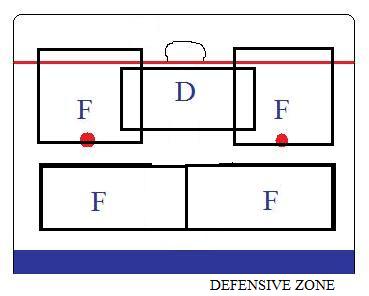 You'll basically have a fluid, passive box with the defensive defenseman holding the front of the net. The key for the entire group is pushing out from the center of the ice, keeping shots to the periphery. The defenseman would be focused on the player most likely to hold position in the center, the opposing forward in the slot.

Similar variations of this formation have been suggested, and the rumor is that Guy Boucher's system in Tampa Bay is not far off the mark either. But those variations have always held an offensive defenseman as the player pushing up which, instead of maintaining one central defender, twists a box that needs to right itself at some point before the defensive zone. What I'm proposing is changing the way we think of positions, instituting a central defender, wings that are viewed as virtual midfielders, and two centers, one playmaking in the low areas of the offensive zone, another bigger, slot-controlling. With the relatively recent expansion of the offensive/defensive zones, I think this has become more feasible.

How would this change what we think of as "lines?" I could see three forward lines of four players, none distinctly different from the other talent-wise (if applicable, sorry bottom-tier teams), because I'm describing distinct roles across the lines rather than lines specifically defined as "shut-down." You'd have four, maybe five defensemen, with your reserve players available as a break for one or more of the wings.

For a game that is as flexible as hockey, it is somewhat surprising that we haven't strayed far from a "four forward lines, three defense pairings" format. That being said, I don't think positions have as sacred of a realm in the sport as does, say, fighting, or playing without facemasks, or many of the other "traditions" that stoke backlash if threatened. In a league that has been recently dominated by defensive systems, maybe it's time to experiment a little.

I should be a freakin' coach. Okay, now I just sound like a drunk fan.

P.S. There's a great set of questions and critiques below in the comments if you want to get into thinking about this formation a bit more. I also have a few comments about some of its finer functions.