Share All sharing options for: Clean Up your Act, Madison Square Garden

Madison Square Garden has long been the bane of NHL shot analysis.  For whatever reason, the official scorers at MSG have incredible difficulties figuring out where the puck has been shot from.  We can see that from the distribution of x-locations there and for the rest of the league: 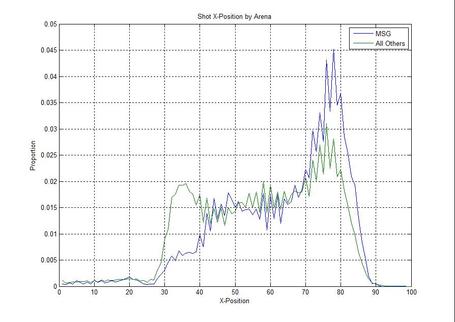 Remember that the goal is 89 feet from center ice.  So from x-coordinates 43 to 69 - 20 to 46 feet out from the goal - MSG agrees with the rest of the league.  But they severely undercount shots from the point and overcount shots from close in.  How they do that is beyond me.  And it's not that they can't get it right - they do sometimes - it's just that most of the time, they don't: 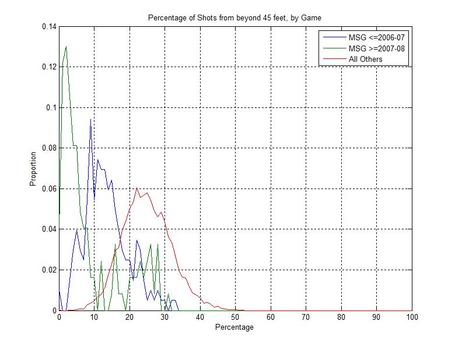 The scary thing is that MSG was terrible at this during the first few seasons that they were recording shots, and they got *even worse* over the last three years.

MSG has similar problems figuring out the lateral distance from the goal: 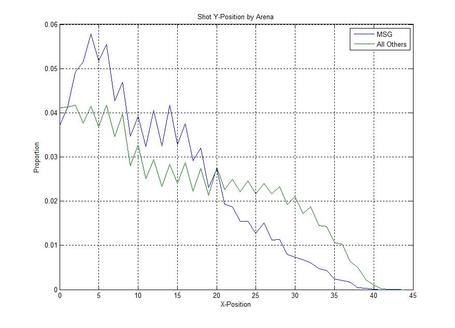 Shots taken in New York are simply much more likely to be recorded in the slot and much less likely to be from outside the dots.  Again, this discrepancy has existed for over 10 years - and it could be solved by giving the MSG shot counter a piece of paper with the coordinates of various spots on the ice.  Why 29 official scorers get this right and the guy in New York blows it is beyond me.  But you'd think the NHL - that instituted replay to make sure that every goal counts - would want to fix the problem.