Yesterday's piece on the teams that took the shortest and longest shifts got me wondering about why Colorado had the shortest shifts until 2006-07, and then abruptly stopped playing that way. Commenter Likens pointed out the impact of altitude - we would expect poorer physical performance at a mile above sea level. And indeed we do: 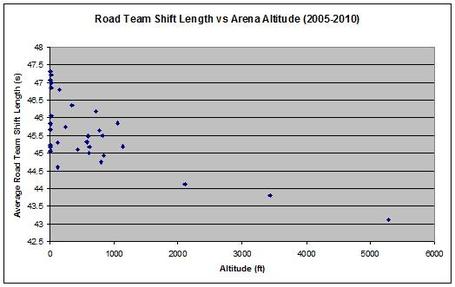 We clearly see the ice time trend. To put it another way:

For every thousand feet that you climb, your shifts get half a second shorter. Now, over the last five seasons, the Avs took shorter shifts than their opponents:

The Oilers, always masters of suspect on-ice strategy, took much longer shifts than their opponents. (It's possible that's all due to Jason Strudwick getting stuck in his own end all the time and not being able to get a change.)

At any rate, here's what the Avs were doing - systematically taking much shorter shifts than their opponents, until 2007-08, when they abruptly changed their strategy:

I forgot to put 2009-10 in the database. Next time. Anyways, this change in shift length doesn't correspond to a change in the coach or general manager - it was an organization-wide philosophical shift.

Compare that to the Oilers:

And then finally, the Minnesota Wild under Jacques Lemaire: