Uncertainty in Sports Outcomes...Or Not...

Share All sharing options for: Uncertainty in Sports Outcomes...Or Not...

Building on a long ago post by Tom Tango, Tyler Dellow started up an interesting conversation about random variance in head-to-head outcomes in different sports. (I highly recommend reading both posts.) Basically, the NBA exhibits a much smaller random variance in its outcomes than the NHL does - basketball games would need to be 20 minutes long to get the same number of upsets that we get in hockey. So then I wondered what happens if we look just at the outcomes of games that are tied at points other than at the beginning:

"There’s a nice way to answer this question - look at playoff games (or all games); assume the line accurately reflects the odds (obviously it may not); and look at the outcomes of games that are tied starting from a given point. You’ll be able to see the percentage of upsets for what are essentially different lengths of games."

There aren't enough playoff games to get much of a handle on this, but I was able to make some headway with regular season games.

I segregated out all games over the last four seasons where one team was a 66.7% favorite or more - the average and median favorites were around 75%. Then I looked at how likely they were to win in regulation time given that the game was tied at a particular point: 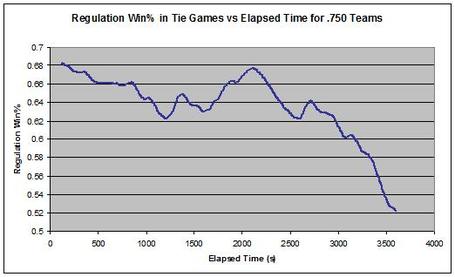 So we definitely see the expected effect - as the game goes on, the favorite is less likely to win. Or, stated another way, playing a shorter game leads to more upsets. Some of you might have noticed that the expected winning % is just 68% at the start of the game - before you get excited that I found a betting inefficiency, these teams win 68% in regulation, but 75% overall (including OT and the SO), as expected.

But here's a strange effect we see with points for overtime and shootout losses. The favorite's expected number of points - shown in blue - doesn't change as the game goes along. (Obviously the underdog, shown in brown, is in way better shape the longer the game is tied.) Starting at the opening face-off, the .750 favorite wins 75% of the time and gets 1.5 points in the standings. But at the end of regulation, their expectation of winning is just 50%, while their expected number of points - because of OTL/SOL - is still 1.5 points. In other words, they get rewarded the same if they play above or below expectations. 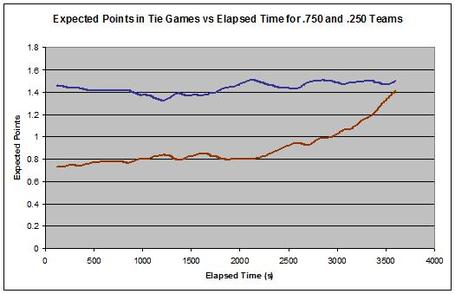 Without the extra point, the incentives are completely different in basketball. I have the data to generate the same charts for the NBA, so I'll find some time to dredge them up and overlay them over the hockey charts.