Just following up on yesterday's post, I wanted to show the percentage of games played and goals scored by right-handed shooters since the dawn of time: 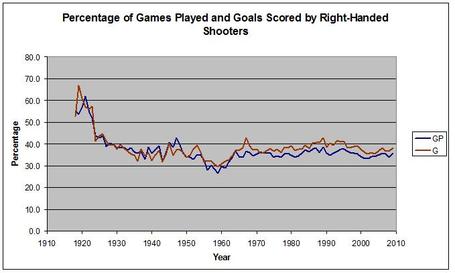 Most right-handed people have shot left (in Canada, at least) since before 1930. What I find interesting is that this phenomenon essentially predates the modern uses of the stick - curved sticks didn't become common until the 1960s, and the slap shot is generally assumed to have been invented in the early 1950s. So whatever the reasoning for having your strong hand at the top of the stick was back then, it's surely different now.