Henrik Sedin: What does his 'Breakout' tell us?

Share All sharing options for: Henrik Sedin: What does his 'Breakout' tell us?

Jon Willis had a nice piece about Henrik Sedin, also known as 'the guy who passes to Daniel Sedin.' Henrik is almost at his career-high in goals with barely half the season gone thanks to an exceptionally high 21.4 shooting percentage. There are lots of explanations out there that have Henrik shooting that well for the rest of the season, but it's highly unlikely that a guy with a 13.2% career shooting percentage is going to be able to stay at 21%.

I found every player who shot 20% during any 100-shot interval over the last four seasons. I then looked at how they did in every other 100-shot interval. The distribution of their outcomes is shown by the blue bar chart below: 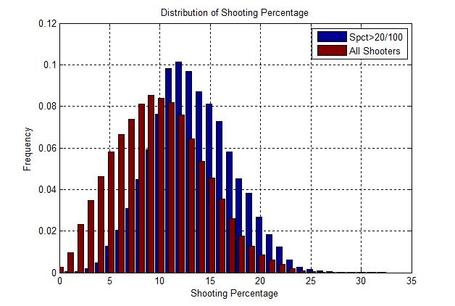 Now we know that anyone who could put away 20 shots out of 100 is a better-than-average shooter. The distribution of all shooters, shown in red, is much less likely to generate a 20% shooting spree than the blue bar chart. Indeed, the average shooter who went 20-for-100 had a 13.2% shooting percentage overall, exactly the same as Henrik Sedin's career shooting percentage. They all had these great runs where they looked like they'd finally figured out how to be truly elite NHL scorers, and they all eventually went back to how they'd done in the past. All evidence points to Henrik regressing to the talent level he established over his career.

If he continues to take shots at the same rate as he has so far and plays all 82 games, he'll finish with 164, which sets his over-under on goals scored over the rest of the season at 9. Anything more than a 30-goal season requires Henrik to play on the right-hand side of our histogram - and way over his head.

(Incidentally, this is not the same case as Vic Ferrari discusses here. If we didn't have 8.5 years of Henrik Sedin's NHL performance to compare to, we would not be as confident in thinking that he's part of the more-talented group of players.)