There are numerous ways to estimate the age at which NHL players peak.  You could, for example, count all games played by players at each age or count the number of players at each age and assume that the largest number corresponds to the age at which player skills peak.  This method is heavily impacted by the group of players who are chosen - if players with short careers are included, the peak age is skewed low because younger players play on potential and leave the league if they don't impress during a tryout; if only players with long careers are used, the peak age is skewed high by a bias towards players who avoid injury.

One way to avoid this is to include all players and account for their performance in leagues below the NHL.  For my sample, I looked at all NHL players born 1962-79 who played exclusively in the NHL, AHL or IHL from Age 21 to Age 29.  I assumed that AHL and IHL points were worth 45% of an NHL point.  The average points-per-game at each age came out as follows: 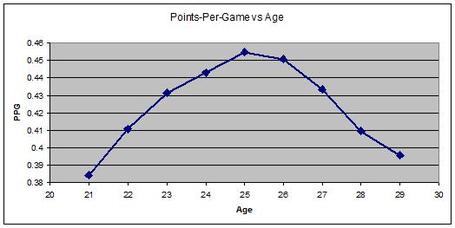 The peak age is just slightly more than 25.  The peak age actually falls at approximately 25 for a wide range of NHL equivalencies for the minors.  This is also roughly the same result as you get if you restrict your dataset solely to players with careers longer than 200 games and you look at the number of NHL games played at each age.  Other methods don't give substantially divergent results - even the most or least restrictive datasets result in peaks between age 24 and 26.