When do NHL Teams play for the tie?

Share All sharing options for: When do NHL Teams play for the tie?

Some of you might think that my blog is about 50% about NHL overtime.  I'll admit it's pretty close.  But I'm intrigued by the strange incentives that the extra point bring to the table.  I've seen several people suggest that teams are more likely to play for the regulation tie and overtime point later in the season - as the playoff hunt really heats up and an extra point has a higher apparent value.  This seems to be true since the lockout: 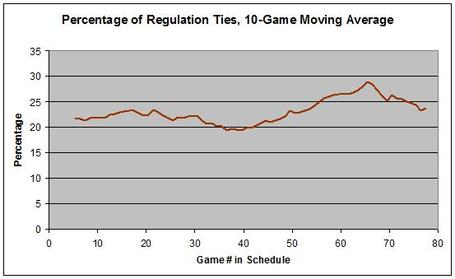 This situation did not exist prior to the lockout.  After the introduction of the overtime loss in 1999-00, there was no explicit effort to play for the extra point.  Most of the time, a tied regulation game ended up in a tie after overtime, so incentives were quite a bit less.  Prior to 1999, there were no extra points, and teams did not use the tie strategically.

I suppose the positive outcome here is that teams do behave rationally in response to the extra points system!