Impact of TOI on rookie scoring in the NHL

Share All sharing options for: Impact of TOI on rookie scoring in the NHL

There were 40 players who made the jump from AHL regulars to NHL regulars last season. That is, they played 40 games in the AHL in 2007-08 and 40 games in the NHL in 2008-09. They retained, on average, 50% of their scoring on a per-game basis (PPG), which is close to the historical value I've found in the past. Not to state the obvious, but are there other factors influencing their performance?

The AHL doesn't publish its icetime statistics, but it's safe to assume that every player who was good enough to make an NHL team got a lot of TOI in the minors. On the NHL side, it's a little different - we see a spread from 8 to 21 minutes for last year's crop. Here's a scatterplot of PPG ratio vs icetime in the NHL: 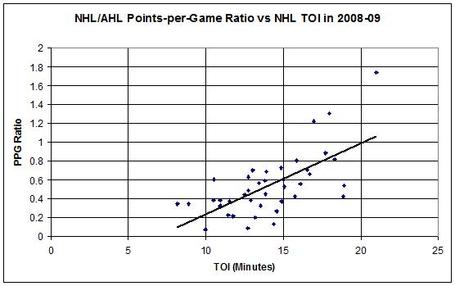 The point up near 1.8 is Kyle Quincey, who got a ton of PP time with the Kings last year and put up a ton of assists. Not surprisingly, it's clear that NHL usage is a huge factor in scoring - if we assume every player translates at the same level, our r^2 is 0.21; if we add NHL TOI to the mix, it goes up to 0.49. Clearly we could do even better if we restricted our sample to forwards and included PP and SH TOI in the model.

Of course, this doesn't help much with projecting rookies - without seeing their performance in the future and reading their coach's mind, how can we know in advance how many minutes they'll get?