Checking Back in with the USHL

Share All sharing options for: Checking Back in with the USHL

Two years ago, I looked at how the USHL had gone from producing an insignificant number of NHL players to accounting for almost 10% of the pros in less than a decade. Forget the 'Miracle on Ice' - the growth of the USHL is the most significant success story in the history of American hockey.

I thought I'd take another look at how the USHL is doing and whether it has continued to produce NHL players at such a high rate. The pertinent plots are after the jump...

First, has the USHL continued its seemingly inexorably path to filling the entire NHL with its player? Sure looks that way to me: 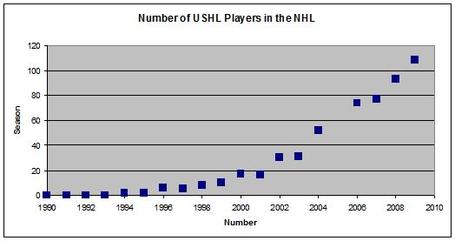 What about the USHL's role as the primary feeder league for NCAA D-I college hockey? Still on the same path - the percentage of USHL players making the jump to the NCAA has been increasing (the blip this season is because we're only 30% of the way through the NCAA season and not every player has made his debut). The percentage of NCAA players who've played in the USHL has also continued to increase: 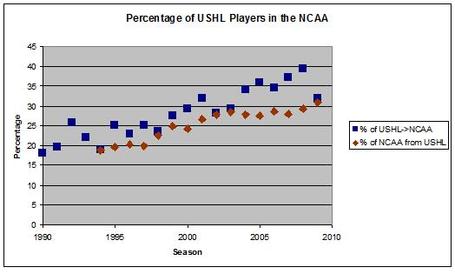 None of this should be in any way surprising - the caliber of USHL players increased dramatically from 1990-2000, and now the sheer number of quality hockey players in the USHL continues to increase. 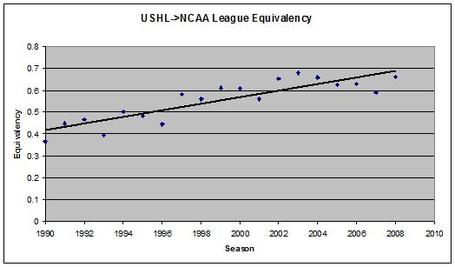 We don't yet see players jumping directly from the USHL to the NHL like we do with Canadian junior leagues, but by age 21, it's difficult to argue with the results: on a per-team basis, the 12-team USHL produces as many NHL players as the 60-team CHL. Canada has achieved hockey saturation, so the number of players going from AAA Midget or Tier II Junior to the CHL and on to the NHL is unlikely to increase in the near future. The USHL, on the other hand, continues to expand its reach as previously-untapped areas of the country like California grow their youth hockey programs.