Advanced Metrics: Do Goalies Need to Face Shots in Order to Stop Shots?

Hockey announcers say goaltenders need to face frequent shots in order to stay sharp during a game. Do the numbers back this up?

Share All sharing options for: Advanced Metrics: Do Goalies Need to Face Shots in Order to Stop Shots?

Rich Pollock asked me an interesting question the other day:

"I was watching the Sens today, and the announcers kept saying that Leclaire hadn't seen any shots in the second and that goalies need action to "play better/feel in the rhythm." I was wondering if goalies actually did post better statistics when challenged more often."

There are a bunch of ways to look at this, but let's see if goalies - in general - give up more goals if they haven't faced a shot recently: 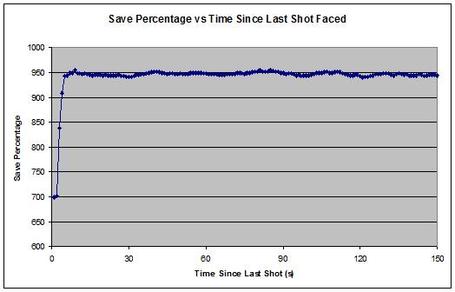 We see the rebound effect for the first four seconds, but if a goalie hasn't faced a shot for between five and 150 seconds, it has no impact on the percentage of shots he allows. I've included all shots at net here - including posts, crossbars, shots over the net and shots that went wide. Even if these shots weren't on target, they presumably gave the goaltender something to work on.