Wall Street Journal column: NHL Teams are Learning How to Love the Tie

Share All sharing options for: Wall Street Journal column: NHL Teams are Learning How to Love the Tie

I've discussed the post-lockout Overtime/Shootout combination several times over the last month.  In particular, I pointed out that teams could vastly improve their records by pushing games into OT, and that over the last four seasons, there's been no correlation between team winning percentage and OT and Shootout performance.  Overall, I find the entire system anti-competitive.

Today, I have a piece in the Wall Street Journal on a change in NHL team strategy this season that has resulted in a 20% increase in extra-time.  In particular, teams have simply stopped trying to win in the last three minutes of regulation. 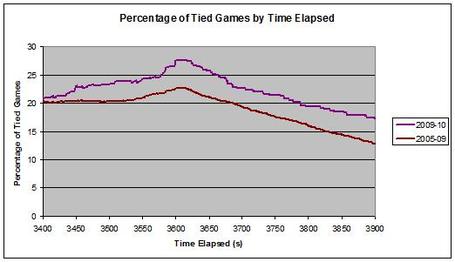 To be clear, nothing has changed in the way that the game is played in the first 57 minutes.  But teams have simply stopped scoring tie-breaking goals in the last three minutes of the game: the scoring rate has dropped to roughly 2 goals per 60, less than half what it was over the last four seasons.  Scoring rates have dropped in OT, too, perhaps reflecting a preference for the shootout, but the biggest change is simply the number of games that go to OT in the first place.  Whether any team will admit it, they've started to take advantage of the extra points available to them if they play for the tie.