Beating Up on the Little (or Big) Guys

Share All sharing options for: Beating Up on the Little (or Big) Guys

The question of tall players hitting short players and whether these hits should be called as head shots came up in the SB Nation discussion list. So I started wondering if there are any consistent trends around size differentials in hits. First, there's a league-wide bias: taller players hit shorter players, though the average difference is small - just 1/4-inch. Here's the distribution of heights by hitters and guys who got hit: 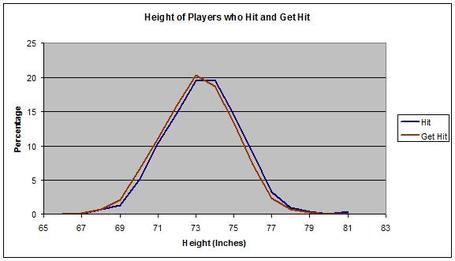 This leads to a very slight change in the distribution of height differential in hits: 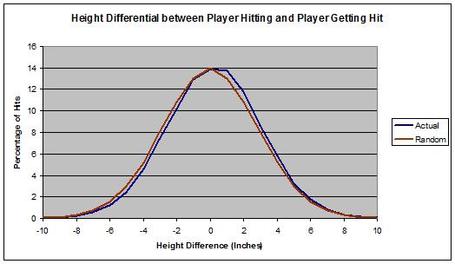 So are there any players who frequently hit players much smaller than themselves? No big surprises here - if you're really tall, there aren't many other players your size who you can hit!

None of these players figure on the list of players who hit the tallest opponents on average. Again, this isn't surprising: defensemen are taller than forwards; but defensemen don't typically get a chance to hit other defensemen, so forwards will tend to hit taller players on average.

Here's the other end of the list. It's significant to note how small the spread is: it's rare for a player to hit an average opponent under 6-feet tall or over 6'2".

Just for completeness, here's the list of players who get hit by the tallest average opponent:

And the shortest average opponent:

I'll come back to this in the future and look at weight imbalances in hitting...