Since the lockout, 55% of games that have gone to overtime have then ended up in the shootout. Eye-balling it, it looks like scoring is pretty uniform: 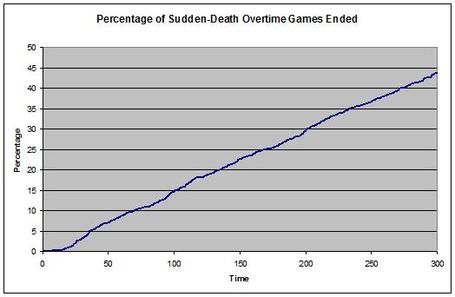 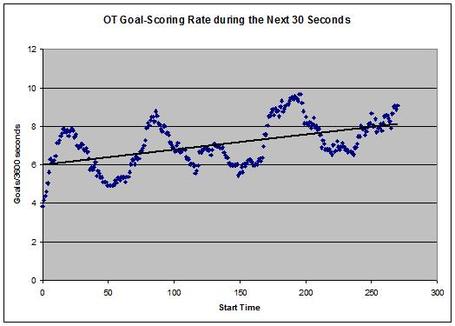 Just guessing here, but it looks like the first line goes on the ice, and scoring peaks as it is finishing its first shift. Then the second line goes on, and there's less scoring. The process repeats twice more, with the third line getting a shift around the middle of the period.

Looking back before OT, we see that scoring in these games tends to remain flat around five goals per game (2.5 per team) until there are two minutes left to go in regulation play. At that point, trailing teams start to pull the goalie and their goal-scoring increases substantially as the downside to giving up an additional goal disappears. What's surprising is that teams do actually play for the win somewhat in overtime - we can see that the scoring rate doubles by the end of the extra period: 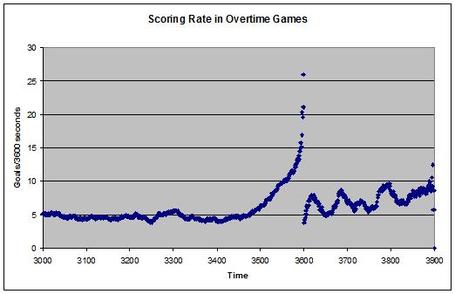 I wasn't expecting this - 4-on-4 features has about 10-15% more offense than 5-on-5 - but the baseline shot rate increases from approximately 80/game during the 3rd period to 100/game in overtime, and increases even further as overtime is about to end: 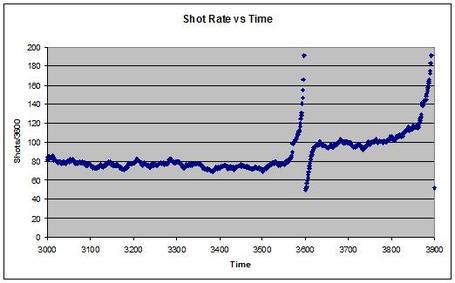 The increase in shooting is about double what we'd expect if OT was played entirely at 4-on-4. But 4-on-3 power-plays make a big difference in shot rate and shooting percentage. So the increased offense in overtime isn't entirely due to teams pressing for the win - some of it is the natural consequence of NHL rule changes that generate more offense.