I've mentioned a few times that overtime and shootout outcomes are essentially "luck." I wanted to put some numbers on it so you can see what I mean.

The NHL played overtime 5-on-5 for the first 16 seasons it was in effect, then went to 4-on-4 for five years, and we're now in the fifth season of the OT/SO regime. While there was some relationship in the past between a team's overall record and its OT record, the introduction of the shootout has completely severed that link. Why play for 2 points in OT against a better team when you can go to the shootout and have a better chance of winning? As I've mentioned before, the incentives in overtime favor bad teams slowing down the pace against better teams.

Now those sample sizes aren't huge, so I thought I'd simulate overtime performance using a constant goal-scoring rate equal to the league-wide scoring levels at 4-on-4. Here's the relationship I get between a team's overall winning percentage and its performance in overtime if I assume that a team plays 20 overtimes per season: 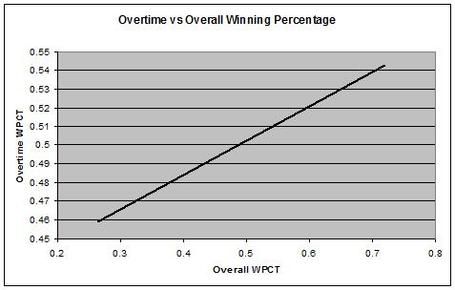 That's 80% regression to the mean - a spread in winning percentage from .250 to .750 gets squeezed down to the .450 to .550 range. And even worse, with the advent of the extra point for overtime losses and shootouts, the number of points a team can expect to get in games that go to overtime regresses 90% from their true winning percentage. A team with a .250 true winning percentage - an expansion team, perhaps - still has a 40% shot at having a winning record or better between the shootout and overtime.

Overtime might seem like it gives a better team another chance to win the game, but five minutes is too little time to have much of an impact. In addition, the completely fluky nature of the shootout gives weaker teams an incentive to play for a tie in OT, so it's likely that overtime winning percentage is regressed even more than 90%. Overtime is a nice gimmick, but it's like Final Jeopardy! - you can be winning all game and one wrong answer leads to your downfall. And to drag the analogy even further, the shootout is like replacing Final Jeopardy! with a quick dart-throwing contest - it emphasizes a skill that's irrelevant to the rest of the game and gives you random outcomes.