Share All sharing options for: Leafs Finally Win One

There have been lots of reasons all season to think that the Leafs are a lot better than they've actually played. The fact that no team - not even the expansion Atlanta Thrashers - has been this bad over a full season was a pretty good one. One fact that was definitely in their favor was that they were out-shooting their opponents 32.8 to 30.0 per 60 minutes at 5-on-5. Horrendous goaltending aside, that's the hallmark of a good team.

Over the last four seasons, visiting teams that have outshot their opponents by 11 shots have a winning percentage of just 53% - counting regulation and OT wins, and splitting shootouts 50/50. And the reason why is shown in this graph: 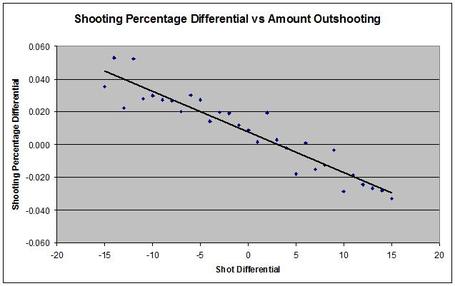 Likens has explored the primary reasons that this happens in the aggregate over at his blog. A team with the lead will play defensively, allowing a lot more shots in general while limiting the number of good scoring chances. At the same time, they'll limit their offensive focus, and end up with fewer shots on goal as a result. If we had the same number of shots on goal, but teams scored six goals per game instead of three - say by requiring every NHL goaltender to be 17 or under - we'd be less likely to see this disparity.

As for the Leafs, they got a big chunk of their shots - and two goals - in the first period last night during an extended 5-on-3 power-play. The two-man advantage is an obvious exception to the notion that all shots are equally likely to go in, and the Leafs scored two goals on seven shots in under three minutes, and it leads to the second-most important truism in hockey: don't take more penalties than your opponents.