Last post on Regression to the Mean. I swear.

There are lots of statistical concepts that I was introduced to in baseball that I realize haven't been sufficient explored or even explained as they relate to hockey. "Regression to the Mean" is one of those concepts, and I probably should have posted this chart before I spent a week talking about it.

Basically, regression to the mean is the idea that any quantity that's better or worse than average in one season is going to rebound to the average in the next season. It's sometimes known as the "Plexiglass Principle." If we look at every team and season since the 1967-68 expansion, NHL team winning percentage regresses 35% to the mean from season-to-season.

The dotted line on the chart is what would happen if winning percentage did not regress to the mean at all - that is, team winning percentage didn't change. Obviously, that's not the case. The solid line shows the best fit for what actually happened for all of those teams - if we know nothing else, we'd expect a .600 team one season to be a .565 team the next. That is, the team is .100 better than average, and it regresses 35% back towards the mean of .500, which is .565. 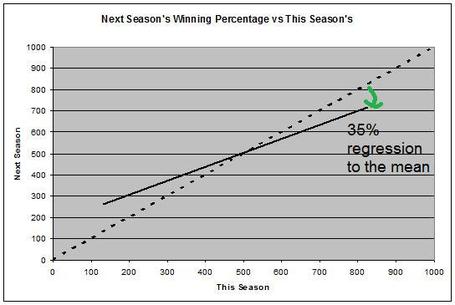