I just wanted to expand a bit on Jonathan Willis' post about how early-season shooting percentage (both for and against) is not very meaningful. Jonathan notes in another post that if we took the Leafs' performance thus far and replaced their shooting percentage and save percentage with that of the horrendous 1999-00 Atlanta Thrashers, the Leafs' goal differential would be a mere -5 instead of -13. And we know (come on, we do) that the 2009-10 Leafs are better than the worst expansion team that came into the league since players were required to wear helmets. So they're bound to get better.

I wanted to put a slightly more quantitative touch on the claim that shooting percentage and save percentage don't matter over short time frames. My plot shows what's called "regression to the mean" for four variables: shooting percentage over the next 40 games and over a full season, and shots per game over the same time frames. "Regression to the mean" basically tells how much you expect a quantity to bounce back towards average - the higher the value, the more likely it is to go to the average. I've used the last four seasons to determine how strongly each of these variables is related to shooting percentage and shots per game at various points in the season. 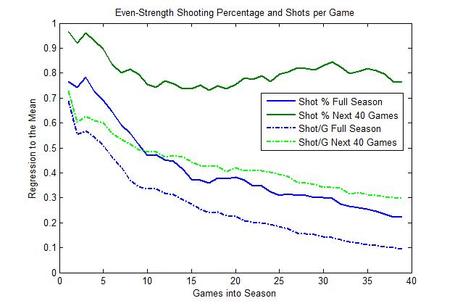 The first thing to notice is that past shooting percentage is not a good predictor of shooting percentage over the next 40 games. That's the solid green line. If you play 40 games and shoot 10% below average, that says basically nothing about how you'll shoot as a team over the next 40 games. Bottom line: there's a tremendous amount of luck in shooting percentage. Shots per game (the dotted green line), on the other hand, are a real team characteristic not significantly influenced by luck. If we watch a team for 40 games and they're a good shooting team, odds are very high that they'll remain one.

But that's not to say that bouncing back will help you recover a bad start to the season. We reach 30% regression to the mean in future shooting percentage after 40 games - but that ignores what's happened so far. We reach that same level in full-season shooting percentage (solid blue line) after about 30 games, and, for shots per game, just 13 games into the season. The good news is that Toronto has actually outshot their opponents at even-strength so far this season, which says they've played well but have been extremely unlucky in terms of what's gone into the net. They've also given their opponents 30% more PP time than they've had themselves, which is, even with Brian Burke running the show, unsustainable - the worst figures last season were Anaheim at 22% and Philadelphia at 23%.

So buck up, Leafs fans! Don't start worrying for another seven games!