Charts of the Day

Share All sharing options for: Charts of the Day

This chart shows the percentage of regular season NHL games that were decided in regulation time, going back to the 1967-68 expansion. The introduction of overtime in the 1983-84 season did nothing to change the outcome of regulation play. In fact, it wasn't until the league-wide goal-scoring rate started to drop precipitously in the mid-1990s that there was any significant change. 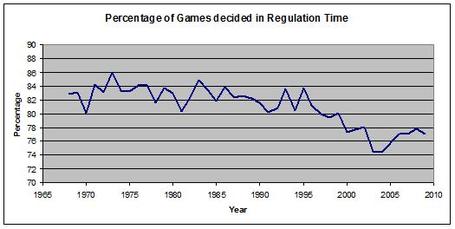 A couple more charts after the jump...

You can see that bringing in overtime in 83-84 changed the outcome of about 1/3 of tie games. As teams began to play more defensively, the number of games going to OT went up about 50%, while the number actually decided in OT stayed flat. In 1999-00, the NHL started awarding a single point to the OT loser - teams became more aggressive in OT, but the number of teams playing for a regulation tie to get the OT point went way up. So the total number of ties stayed the same.

In an effort to have every game end with a decision and hopefully some level of suspense, the NHL decided in 2005-06 that every regular season game that's scoreless in OT has to go to a shootout. This has had zero impact on overtime strategy, but it has given us a lot more penalty shot moves on the nightly highlight reel. 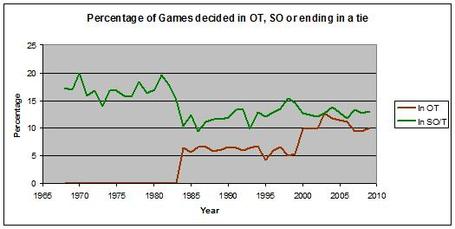 One last chart - almost a footnote. The percentage of goals scored in regulation time had been dropping steadily for years but has finally leveled-off. There's a big drop from 2003-04 to 2005-06 because the league started awarding the phantom shootout goal that goes to a team but not to a player. But everything has essentially been in equilibrium since the lockout, which was certainly one of the many goals of the rule changes. 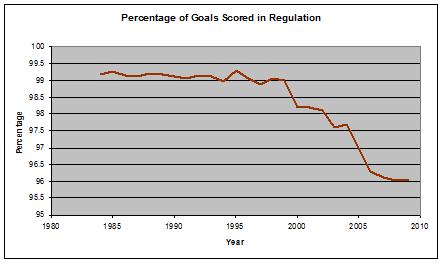