If hit totals in the official NHL statistics are a little dubious, then giveaways and takeaways are on a whole other level. While the average rink records 14% more hits by the home team than by the visitors, home team takeaways (and visiting team giveaways) are 30-40% higher. In fewer than 3% of cases did official scorers report more takeaways by visiting teams or giveaways by their own team. And the rinks with the highest totals often record eight times as many as those with the lowest totals. The Phoenix Coyotes, as bad as they were last year, somehow gave the puck away just 83 times at home; the Sharks, with shutdown defense, recorded 375 in San Jose.

And with that kind of uncertainty in the results, you can bet that the process looks bad when you look closely too. Take this brutal giveaway by Patrick Marleau last year against the Carolina Hurricanes, which leads to a goal five seconds later (click on the photo to watch the video.) Marleau would probably get benched on my beer league team for passing the puck across the slot to a forechecker, but he was not assessed a giveaway on this play by the scorers in Carolina. 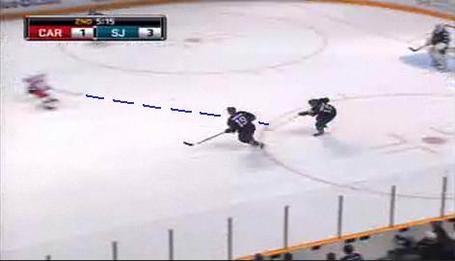 Here are the road takeaway and road giveaway leaders since the lockout.

An interesting group of players, to say the least. Giveaway leaders are mostly players who have the puck a lot and presumably have more opportunities to give the puck away. The takeaway list is minimally different, though it includes a lot of good penalty killers and guys who lead their teams in quality of competition.

While road hits were probably a reliable enough indicator of total hits, the rink-to-rink variation in giveaways and takeaways means that players in some divisions play a large number of games in rinks that undercount or overcount these events. It's unclear what method they use to make the adjustment, but Hockey Analysis offers single-season adjusted takeaways and giveaways.