Not surprisingly, giveaways have a highly-negative defensive impact. The peak shot rate against following a giveaway is as high as during a 5-on-3: 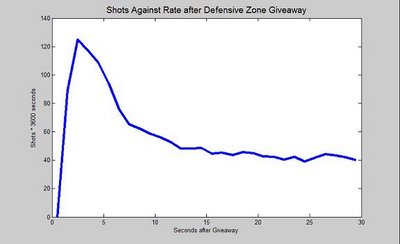 Of course, not all defensive zone giveaways are the same. As you can see from the chart, the vast majority of giveaways occur behind the net and along the boards. It’s not clear whether scorers consistently record the location where the puckhandler gave the puck away, or where the opposing team picked up the turnover. However, since most turnovers occurred behind the goal, it is unlikely that we are substantially undercounting giveaways in the slot, for example, so the chart likely captures the actual distribution of giveaway locations.

The defensive cost of a giveaway has a slightly different profile. While giveaways behind the net or along the boards result in a shot against over the next 10 seconds of play about 25% of the time, giveaways in front of the goal are (not surprisingly) almost twice as likely to result in a shot. 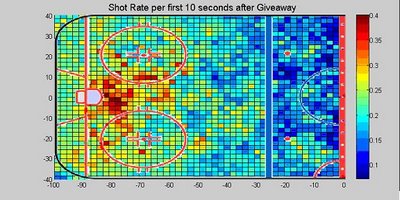