Share All sharing options for: Shootout Length: Model vs Actual

Here is the data from 2005-2009 shootouts compared to my simple model (assume all shooters have a 33% chance of scoring.) Short shootouts are far more likely to occur than predicted: 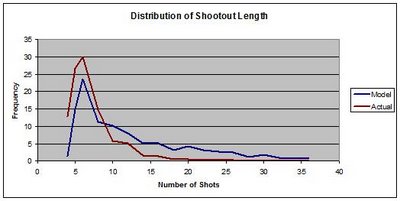 This isn't surprising - there is tremendous talent variation among shooters and goalies in the shootout. So the first two pairs of shots are often significantly tilted in one team's favor, leading to an early exit. Why does this inefficiency persist? Well, there aren't many options in goal, first of all. As for shooters, I haven't looked at shootout data in a long time, but initial returns indicated that coaches had not properly assessed the true shootout talent of their players. You'd have to take a lot of penalty shots in practice to figure out who's a 40% scorer and who's a 30% scorer, and for one or two points in the standings per season and no impact in the playoffs, it may not be worth the time.