Average Number of Shots in the Shootout

Share All sharing options for: Average Number of Shots in the Shootout

A friend of mine asked me how many shots their were in an average shootout. I'll admit that I gave a wildly incorrect guess, but I wanted to know the answer to his question, so I wrote a little simulation to get the answer. Here's the average number of shots in the shootout versus the likelihood of scoring: 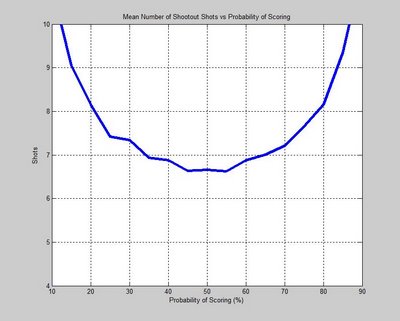 Intuitively, the trend makes sense: if you never score, the shootout will never end; the same is true if you always score.

How does the model compare to reality? The average scoring rate over the past four seasons in the NHL is 33.1% - the simulation predicts just slightly over seven shots on average. The real average has been 4058 shots in 588 shootouts, or 6.9.