How does scoring in junior predict the likelihood of playing in the NHL?

Share All sharing options for: How does scoring in junior predict the likelihood of playing in the NHL?

In the past, I've examined how scoring translates from junior hockey to the NHL, but I haven't really considered how likely it is to get left by the wayside and not make the transition to the NHL. To produce the chart below, I normalized all junior scoring to an arbitrary level (QMJHL, 1997) and then looked at how likely players are to play 60 games in the NHL before age 24 based on their scoring. All ages are as of January 1st of a given season. 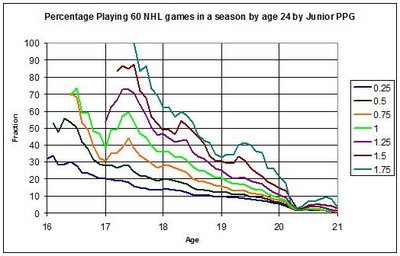 The results aren't in the least bit surprising: you're more likely to stick in the NHL if 1) you score a lot; 2) you score a lot when you're younger. If you're over 20 and you're still playing junior, odds are you haven't impressed a pro team in training camp and you're almost out of options.

Each age data point includes players that are three months younger and three months older. There is a small 'blip' in the data around 17.3 years old, roughly corresponding to the cut-off date for the NHL draft. Players who just miss the cut-off date and have to play an extra year in junior end up being slightly less likely to play in the NHL because they've lost a year of development.

If you want to draw a line in the sand, it would be this: a draft-eligible player who scores a point-per-game has a 50/50 chance of playing regularly in the NHL.