Scoring Probability vs Length of a 2-man advantage

Share All sharing options for: Scoring Probability vs Length of a 2-man advantage

I was asked recently about how the length of a 5-on-3 affects the rate at which teams score. Obviously, very few 5-on-3s run a full two minutes - it's both rare to take two penalties at once, and to successfully kill a two-man disadvantage. (In fact, it has only happened once so far during the 2008-09 season.) Here is the overall scoring rate this season for power plays versus the length of the man-advantage: 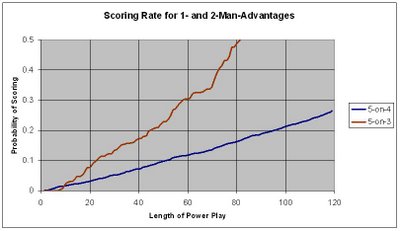 The way to read this is as follows - at 60 seconds, 30% of 2-man-advantages have resulted in a goal, while the rate is about 12% for 5-on-4s. That includes all goals scored in 60 seconds or less, and all power plays that have lasted 60 seconds or longer. If you're already on a 5-on-4 and there's a delayed penalty call against the other team, the break-even point for simply passing the puck to the other team is very low - certainly you should do it if you're looking at a 2-man-advantage of 15 seconds or longer.

This chart would look slightly different prior to the 2008-09 season. A rule change for this season puts all face-offs to start a power-play in a team's offensive zone, regardless of where the puck was touched by the offending team. In past, teams would have required another few seconds to move the puck up the ice on some power plays, and the scoring rate would have been shifted rightward in the first few seconds.